One of the stories I’ve heard about Mrs Takata was about how she was tested by some Native American chiefs.  I was delighted to hear more of this story, and see some documentation about it that deepened my understanding, at the Takata Archives presentation I attended in February this year.

The story goes that Hawayo Takata met a Native American chief and gave him a Reiki treatment,   He asked Takata what she thought she was doing.  She explained that she was using natural life force energy to heal.  He found that this was very similar to his own culture’s understanding of healing, so he asked Takata if she was willing to be tested.  One of the things I learned from the Archives presentation was that Takata was always willing to be put to the test, her faith in Reiki being unshakable. 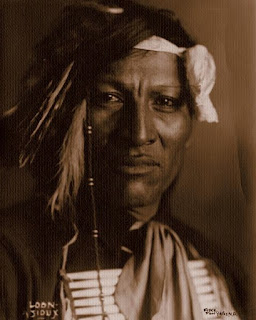 which he found helpful.

It was therefore arranged that she, the Native American chief and some of his fellow chiefs would meet in a hotel in America.  For the test, they asked Takata to send them distant Reiki healing to their room along the corridor.  This she duly did at the arranged time and when they met again later that day, they declared that she was indeed a powerful healer.

What I had not known until I attended the presentation was that they not only told her this, they also gave her a certificate declaring that she was recognised as a natural healer.  She was even given a Native American name which translates as ‘Little Flower’.

This document, together with many others, is now part of a special collection that will be held as part of an archive of resources for all Reiki students.  The collection contains a variety of things that belonged to Hawayo Takata.  For many years they lived in boxes in Phyllis Furumoto’s home, until she decided that the time had come to open the boxes so that this precious collection could be properly catalogued and cared for in a way that would make it available to the world-wide Reiki community.

She gathered a team of people to look at what was in the boxes and decide what to do with it all.  The boxes contained newspaper articles, handwritten letters and never before seen photos, golf trophies (Takata was a keen golf player) and many other documents.  It was a huge task!

One of the people who took part in this work in the Archives Team was Joyce Winough, and she is coming to the UK again in October to talk about this amazing work and share some of what they found in the boxes.  When I attended the presentation in London I found it very moving – both to see photographs of Takata I had never seen before, and also to learn more about her family history and history of Reiki.  Often what was shared confirmed stories I had heard like the one above.  Tapes of Takata telling various stories were also played, which I had not heard before.  It’s moving to hear Takata’s voice talking about her Reiki experiences.

So if you are a Reiki student and are able to get to Birmingham in October I strongly recommend you attend the Takata Archives Presentation taking place.  You will be able to see a picture of the certificate from the Native Americans amongst many other treasures!  It is also touching to share this experience with Joyce and other Reiki students.
Posted by Kate Jones at 08:00