A few years ago, my friend Feona Gray thought of celebrating Dr Usui’s birthday by giving reiki taster-treatments in hospitals around the country.  She approached someone she knew with the idea, only to discover that reiki was not welcome in NHS hospitals, due to concerns about the unpreparedness and lack of professional training  of practitioners.  Feona decided to explore further what would be needed for this to change; as a result we now have Connecting Reiki with Medicine, which has enabled six reiki practitioners to undergo specialist in-hospital training and be paid by the charity ‘Full Circle Fund Therapies’ to give reiki treatments to patients on critical care wards of haematology, oncology and neurology at St George’s Hospital, London.

I have followed this inspiring project from the start so was excited to visit in July, with Johannes Reindl, our new Lineage Bearer.  Arriving at the hospital we met Suzanne Ruggles, CEO of Full Circle Fund Therapies who introduced us to the work and was our guide for the afternoon.  We then met one of the practitioners, Raquel Martin who took us to the bone marrow transplant and haematology ward.    Many of the patients, being critically ill, have compromised immune systems, so good infection control is essential.  Johannes and I were required to wash our hands, use the hand gel and to wear disposable aprons and gloves before going near the patients.  We observed a treatment for a woman with leukaemia, seeing how reiki eased her discomfort, so she was able to rest.

On a different ward we met the Nurse in Charge, who, when asked about her views on reiki on the wards, was very appreciative of what it offers to both patients and staff.  She talked about how the reiki treatments create a quiet time on the busy ward.  We heard similar comments from another Nurse in Charge and a matron from other wards we visited.  What is of particular note about this project is that, due to the specialist in-hospital training they receive, the practitioners are appreciated as members of staff, allowed to access and write-up  patients’ medical notes, rather than as complementary therapist visitors.

We met another practitioner, Anne- Marie Carratu, who took us to see her patient who had just received upsetting news from the palliative care team.  When asked about her pain, she rated it at 5 on a scale of 0 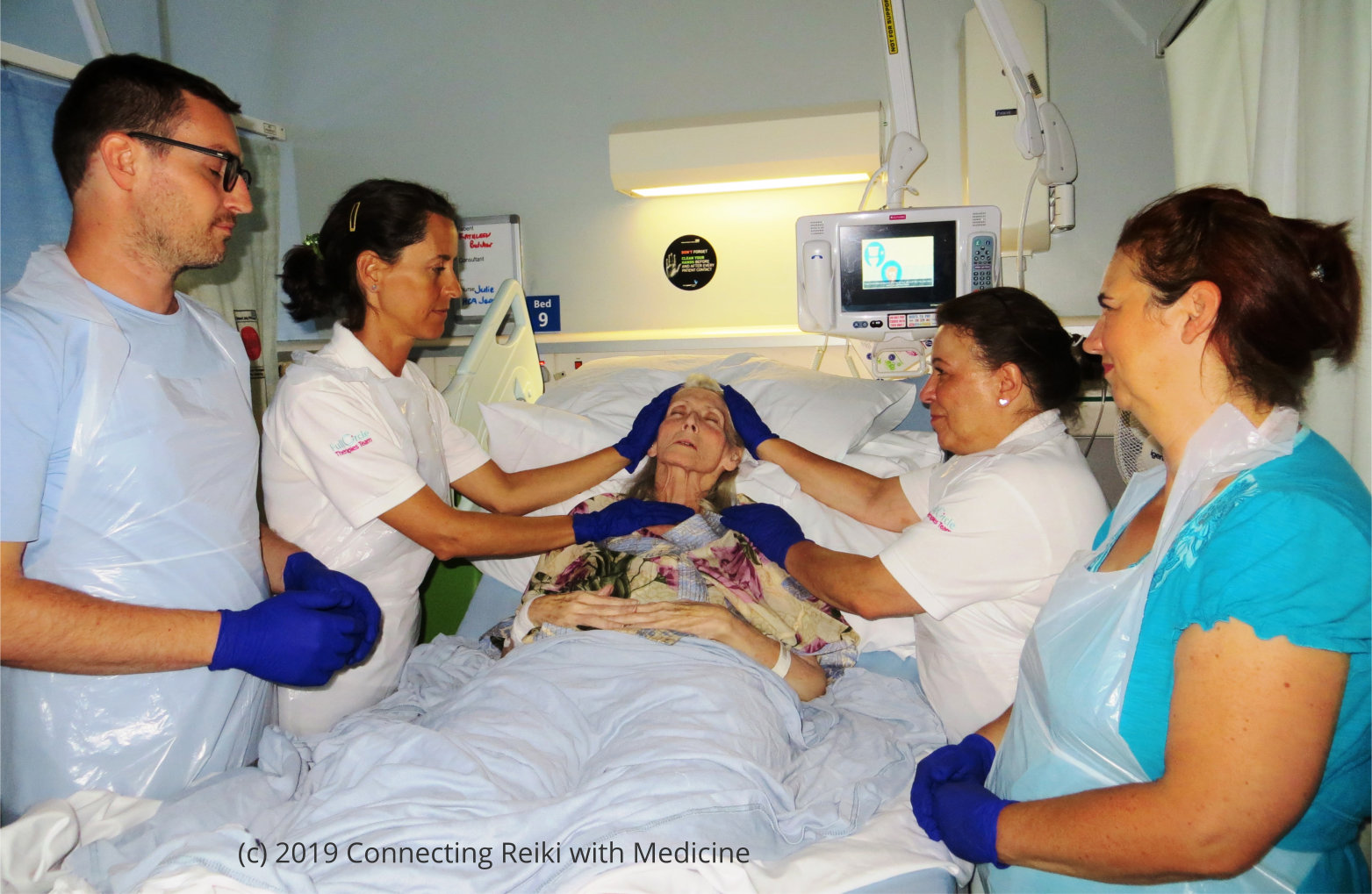 to 6, even with the hospital pain management medication.  Anne Marie and Raquel began treating her, then Johannes and I were invited to join them.  At the end of the 20 minutes the patient sighed and said “I feel as if all my burdens have been lifted.”  When asked about her pain level she said it was zero.  When Anne Marie checked back half an hour later, she was still pain free.

Over a three year period, six reiki practitioners have completed the training and  give 20 – 30-minute reiki treatments on the wards.  They have delivered 900 treatments and reiki is now available five days a week.  450 patients, over a one year period, were asked what symptom was most of concern to them.  The most common symptoms in order of frequency were pain, difficulty with sleep, anxiety and depression.  Where possible they were asked to rate their symptom before and after treatment based on a scale of 0 to 6.  129 patients responded after the treatment - many of the rest were asleep, in spite of reporting pain was keeping them awake, so they were not disturbed to find out how they felt!  No increase in symptoms was reported.  The average symptom before treatment was rated at 4.2 and after reiki was 2.9, most of which was reduction in pain.   On 13 occasions the score was reduced to zero.

While they work primarily on oncology, haematology and neurology wards, the practitioners are also receiving referrals from other wards, such as cardiology.  Such referrals always require the agreement of the consultants and nurses in charge, especially in these highly complex areas of medicine. With further much needed research, reiki could even be recommended for some in support of medical treatment and become a part of mainstream integrated medicine.

If you would like to make a donation to support this valuable work you can do so here: http://www.totalgiving.co.uk/charity/full-circle-fund-therapies
Posted by Kate Jones at 09:00 No comments: