This month I will be going to a very special Reiki gathering: the 25th Birthday of The Reiki Association (TRA).  I attended inaugural meeting of TRA in August 1991 at Harborne Hall in Birmingham.  It was the first time 100 Reiki people from differing Reiki systems had come together in the UK.  Being a member ever since has meant a lot to me both personally and as a Reiki master and practitioner.

The other inclusive aspect of TRA is that it is open to people of all Reiki systems/styles (although members must have received their initiation in person from a Reiki master).  It was not an easy decision to be open in this way because at the time many of the differing Reiki systems were evolving and there was some hostility and defensiveness between the different styles.  So the decision TRA made in those early years to be open to all Reiki systems was not an easy one and has been challenging over the years. 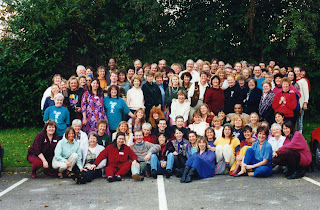 Reiki Gatherings have always been an important part of TRA's activities.  The picture here is of the first weekend gathering TRA organised in Sutton Coldfield in 1994, with Phyllis Furumoto as special guest.  Phyllis always encouraged TRA to remain open and inclusive and her attendance at several of the gatherings over the years has helped to foster this.

Gatherings are an opportunity for Reiki people to share Reiki treatments, experience being in community, connect and re-connect with friends, share stories and have fun - as well as the more formal aspects of annual meetings.  These  gatherings have offered the experience of being in community with people who have different ways of teaching and practicing Reiki and differing beliefs.  Like a microcosm of human conflicts through-out the world, gatherings are a place for differences to be acknowledged and accepted, our uniqueness and also connection through Reiki celebrated.  We have learned to move beyond the distrust and conflict to a place of resolution and peace.

I feel fortunate to have been involved in TRA since those early years (as TRA's administrator from 1992 to 2004 and on Council from 2009 to 2014) and it has certainly contributed to my development as a Reiki master.  Through this involvement I've made many good friends and learned to surrender to being in community!  I also met and became friends with Phyllis Furumoto, Paul Mitchell and Rick Bockner - all students of Hawayo Takata.  Wanja Twan - another of Takata's students and the woman who initiated my Reiki master - also attended a TRA gathering.  Being able to listen to the wisdom of these more experienced masters has been a great gift from TRA that I value highly.

Representing TRA in the development of the National Occupational Standards for Reiki and on the Reiki Regulatory Working Group (which became Reiki Council) were also opportunities to develop compassionate ways of working with people of differing views!  This work is the foundation for my practitioner training, through which I aim to offer Reiki students a deeper connection with their Reiki practice.

So I will certainly be dancing for joy at this year's TRA gathering, celebrating our years together as an inclusive community!
Posted by Unknown at 16:59 No comments: