Do you enjoy opening presents at Christmas?  But do you sometimes feel awkward opening a gift with the giver?  Maybe you won't like the contents, but still have to say you do?  In Japanese culture they have a solution for this...

In preparation for the trip to Japan we were asked to bring some small gifts with a connection to where we live.  I also took presents for my host for the few days before the tour.  With other gifts I took on behalf of someone who had been on the tour with Phyllis previously, my suitcase was quite full of things to give away!  It also contained  sellotape and wrapping paper because I learned before I left that the wrapping is almost as important as the gift in Japan. But would the Japanese people appreciate what I had chosen?

Reading a guide book on the flight, I learned that it is a Japanese custom that gifts are not opened in front of the giver.  I love to see people's reaction when they open a gift I have chosen for them, but of course this does create potential embarrassment if someone doesn't like what I've given them. 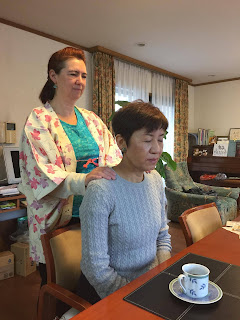 With the Japanese tradition the recipient can open the gift in private, with no awkwardness if the gift has no meaning for them.  This doesn't mean a carefully chosen gift isn't appreciated: I found that while I was thanked when the gift was given, there were also thanks once it had been opened.  This felt kinder than someone saying 'Oh it's lovely' if it wasn't what the person wanted!

The class form and initiations are like the carefully prepared gift wrap when I teach Reiki.  I have no expectation that the receiver will really know what the is gift until later.  It's only after the class, when the student goes away and starts practising, that they begin to unpack the mysterious contents and experience the wonder that Reiki offers.  I remember thinking what a wonderful I had given myself when I first felt Reiki coming from my own hands into my body after the 1st degree class.  One of my students, who has been practicing for many years, describes Reiki as "the gift that goes on giving".  I would agree: the more Reiki I have given over the years (including self treatment), the more benefit I have received.

I'm grateful to my Reiki master for this amazing gift she gave me when she initiated me.  I'm also grateful that she encouraged me to discover for myself the true gift through practice.  Like the game of pass the parcel, with a small gift in each later, I have unwrapped layer after layer, releasing  discovering the gifts of grace, joy and good health to name but a few.   Sometimes a layer is challenging to open, but there is always a happy reward.

My pilgrimage to Japan was one such gift  and I received many physical presents and spiritual insights to bring home.  Thank you to everyone who helped me to receive it.

Wishing you a happy time of opening your gifts over Christmas and in the New Year.
Posted by Kate Jones at 15:11