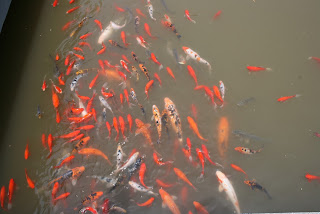 During a First Degree Reiki class in a student's home some years ago the students were exchanging treatments next to a fish tank that contained two goldfish.  We noticed that as we started to do Reiki the fish swam up to the end of the tank closest to the treatment couch.  When we stopped doing the treatments they swam around the whole of the tank.  What was interesting was that this happened each time we began to do Reiki.  The owner of the goldfish later told us that one of the fish was unwell.

So when a student asked in a recent class about whether I thought Reiki could help her sick goldfish I said yes.  I have on other occasions put my hands to the glass of fish tanks and found that the fish swam up to the hand and stayed there for a while, as if they could feel the Reiki.

Of course when giving Reiki to fish it isn't necessary (or a good idea) to take them out of the water.  Reiki will transmit through the water (and glass if they are in a tank).  I have experienced Reiki through water myself when I burned my hand and held a bag of iced water against the injury and gave the area Reiki through the water at the same time.  It was just the same feeling as when I have hands on directly.

So I was delighted when my student shared the following story of giving Reiki to her goldfish:

"I am already feeling the benefits of self-treating myself daily and have given Reiki healing to a very sick goldfish who was suffering from swim bladder disease and had lost all his buoyancy, as well as his appetite, and barely moved. After isolating him for 7 weeks and giving him 3 courses of medication with no sign of improvement, I had all but given up on him.

However, at the end of my first day of the Reiki First Degree course, I placed my hands on his tank and gave him 5 minutes of Reiki energy and he started moving. At the end of a week of doing the same thing every day, he had regained his buoyancy completely and his appetite, was swimming normally and I was able to release him back into the pond.

I have never had a goldfish recover from swim bladder disease and I am still amazed at his recovery – I am convinced he was healed by the Reiki energy as there really is no other explanation."

There are many other people offering Reiki to animals.  When I attended the Reiki Council meeting recently I heard that there are plans to create National Occupational Standards for practitioners who want to work specifically with animals.  This doesn't mean that anyone with their own animals will be subject to any rules, but will ensure that those who offer animal treatments as a profession will be expected to meet agreed standards.  I think is a positive move for animal treatments and the good reputation of Reiki in general.
Posted by Kate Jones at 11:35